How to make Raspberry and Vanilla Macarons Recipe. Included with the recipe is the raspberry and vanilla buttercream filling recipe.

After whisking the egg whites together, the below photo of the mix shows you how it should look like.

After filling up your piping bag then pipe the mixture onto a parchment paper that is not greased or you will allow the macaron mixture to absorb the liquid and then it will spread wider and not rise that well.

Try making them equal sizes even if you need to draw out the sizes on the paper. Its important to leave the piped macarons to rest for at least 20 minutes before baking. This will allow them to rise better once in the oven.

Get this baking set of Macaron Baking Mat, Macaron Mat Baking Sheet,2 Piping Pastry Bag with Bag Tie,6 Piping Tips to do this delicate job well. Its all you need. Purchase online.

When they are baked and after cooling for a while then this photo below is what they should look like. Having the edges with this rough texture. Equal is size is perfect.

The best is to make these macarons a day before and rest them overnight, just like making meringues. Before making the fillings and piping them.

Purchase this idea to pack your macarons in when gifting. 25 Pack Macaron Box with Clear Window Macaron Boxes

A popular snack or dessert with some coffee or tea for friends and family. Spoil them and try other flavors for different colors with this recipe. For a fine dining dessert serving purchase online this Crystalia Glass Small Patisserie Service Platter

Macarons are not that hard to make when you understand the correct process.

Pink and creamy macarons to offer your special guests for teas.

Below is the detailed recipe to download or save. Even if you would love to just write the recipe out and file it in your recipe folder then download the recipe page provided in printables for you.

The prep time includes the time you rest the piped macarons before you bake them. 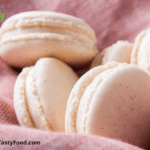 How to make Raspberry and Vanilla Macarons Recipe. Included with the recipe is the raspberry and vanilla buttercream filling recipe.

1 / 2 drops of food coloring. (not for vanilla macarons)

Add the ground almond flour and powdered sugar to the food processor and pulse to combine them well. Pour into a sieve and push it through making sure its all fine.

Separate the room temperature 2 eggs, saving the yolks for another recipe. adding the whites to another bowl with the salt. Whip your egg whites until they become foamy in a stand mixer or with a hand mixer.

Sprinkle in the 1/4 cup of powdered sugar with the mixer on high. When the egg whites are at the soft peak stage add the raspberry essence/vanilla essence and coloring(if you making raspberry ones) Whip the egg whites again until they reach stiff peaks.

Spoon the macaron batter into a piping bag with a small round tip and pip 1 inch rounds about an inch apart on a lined baking sheet. Do not grease or use spray and cook, any liquid will affect your macarons. Then tap the sheet on a work surface a few times to remove any air bubbles and leave to rest for 20 minutes before placing in the oven. The air firms them up better and when they bake they will rise better.

When you can touch the macarons without smudging them place into a preheated oven at 150 Deg, C (300 Deg. F) and bake for 15 minutes.

Cool completely before filling. ( they are best to be made the day before and rested overnight)

Add the soft butter to the bowl of your mixer, Mix on medium speed for about 5 minutes or until light and fluffy and doubled in volume.

Add the sugar slowly a cup at a time, mixing well in between each addition until well combined.

Then add the vanilla essence/raspberry juice and milk and give the buttercream a final mix.

Pipe 1 Tablespoon worth about an inch of buttercream on one of the macarons and top with another, pressing until the buttercream reaches the edges.

Continue with the remaining macarons.

Macarons are best the next day, so make them a day ahead. As well as using a gel coloring for using a liquid can make them spread out more.

When changing flavors use 1 teaspoon of different extracts or essences of your choice.

Get more dessert recipes here below.

Go view in the FREE Printables menu for a few downloaded prints that will give you information when baking and help with collecting written out pages for recipes.

This post may contain affiliate links, where we earn from qualifying purchases. See more details in the policy page.