Easy Homemade Cinnamon Rolls. How to make and bake these tasty homemade cinnamon rolls with vanilla or coffee flavor icing.

Making this dough for the cinnamon rolls is easy and any beginner can make this recipe. Homemade and uses dry yeast, with only one rise then baked. My type of recipe as dough is very tricky for me.

Lets face it having a mixer does wonders for people who have problems with making dough. Even a bread machine can mix the dough for you to a stage.

Below is the first steps to take when dough has been mixed.

Rolled dough with soft butter spread over it.

Sprinkling the sugar and cinnamon on the rolled dough is easy.

Once the filling is sprinkled over it. then roll up tightly.

Cut the rolled dough in sections to place on a tray.

Placing the cut filled rolled cinnamon dough in a casserole dish to bake.

Baking these rolled cinnamon sprinkled rolls in an oven until brown.

After making the icing drizzle over the warm cinnamon rolls and leave to cool.

What better than to sit at a table near the window and have some tea with friends or family with these amazing tasty fresh cinnamon rolls. Fresh out of the oven.

A very tasty cinnamon roll iced with vanilla or coffee icing, placed in a serving plate to eat with a warm cup of coffee.

The recipe below to download or save of Easy Homemade Cinnamon Rolls.

If you wanting to write out this recipe then download the General Recipe page for FREE, to keep in a recipe file. (click on highlighted words to download)

Get some great recipes here 18 Mother’s Day Morning Tea Ideas to spoil your mother and show how you appreciate her. 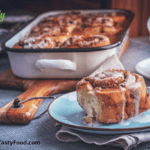 Easy Homemade Cinnamon Rolls. How to make and bake these tasty homemade cinnamon rolls with vanilla or coffee flavor icing.

3 Tablespoons of melted or soft butter

2 – 3 Tablespoons of milk or strong coffee

Whisk the flour, sugar, salt and the yeast together in a large bowl and set aside.

Combine the wet ingredients such as milk, water and the melted butter together in a pot. Warm the mixture up and pour into the dry ingredients. Add the egg and mix the mixture with your mixer until a dough is formed.

On a lightly floured surface using your floured hands, knead the dough for about 3 minutes. Place the dough in a greased bowl and cover and let rest for about 10 minutes.

Then roll the dough after the 10 minutes in a rectangle. Spread the softened butter on top. Then sprinkle over the butter the mixture of cinnamon and sugar. Roll of the dough tightly to make a log of about 14 inch long. Cut into about 12 even rolls or what you can manage. Arrange these rolls in a lightly greased casserol dish or pan.

Bake for about 25 – 28 minutes until lightly brown and done. (if the rolls are browning quickly cover with aluminum foil to prevent it)

While these are baking make the icing as below.

Whisk the white fine sugar and vanilla with the milk/coffee. Drizzle of the warm rolls as soon as they come out of the oven.

For the leftover rolls you can cover them tightly and store at room temperature for up to 3 days or place in the refrigerator for 5 days.

Other Rolls that you would love the bake at home.