Bangers and Mash with Gravy 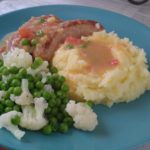 Bangers and mash with gravy and vegetables recipe. Easy meal for a lunch or supper on stove top and tips on how to make mash potato.

Cut potato into small squares for faster boiling. Place them in some water that covers the potato’s and a teaspoon of salt and then bring to boil. Boil until soft (the knife can pierce them).

Meanwhile in another pot boil some water and place in a little salt, then add the peas and cauliflower to bring to boil until cooked. (tender)

Also in a sauce pan add the sausages (bangers) with a little water and heat it up on medium. Cooking slowly until browning. Then turn and brown the other side until cooked.

Once the potato´s are cooked drain them in a colander and add the butter and little milk. Start mashing with a masher and add a little milk if needed. Mash until nice and smooth.

In a serving plate add the potato and the drained mix veg. Then the sausages and spoon the gravy over the mash potato and sausage and serve hot to eat.

Keywords: Bangers and Mash with Gravy and vegetables